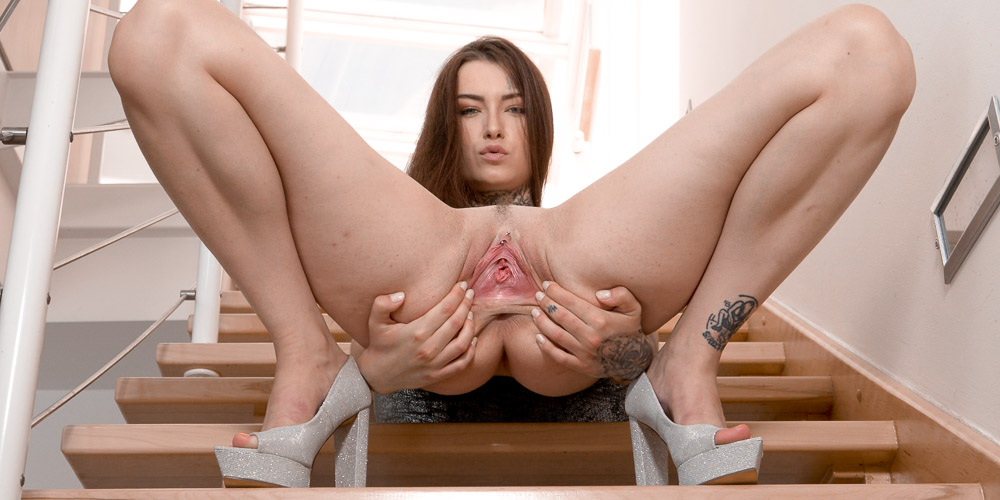 Love her spreads at the end. I'm personally always in love with ass-up pussy spreads and gapes from behind. She has a particularly nice ass-up pussy gape. So enticing and beautiful.

Tabitha has such a beautiful stunning face and eyes. She is a tremendous looking girl. Love the little dress and shoes. Many more videos please. Thanks Jiri.

I love model posing barefoot. No shoes at all. She is beautiful and has a great body.

Excellent location. Huge lover of "stairs & underthebridge" scenes. Love members different likes & opinions. Personally I love it when the models have their sexy shoes on. So hot and the spreading and into the camera gaze is a nut buster everytime. Keep it coming Juri.

Tabitha is definitely a great new model. I love the way she moans and moves her hips as if she is actually having sex. I hope to see plenty more of Tabitha gaping her beautiful pussy from the front and definitely from behind, ass up. I would love to see a great POV ass up gaping from behind, straight on camera angle and showing her complete body.

She got quite a nasty tattoo on her belly, in Germany that might get her in some trouble. ;-)

Yeah, we know. She can't get undressed in Germany and Austria ;-) Jiri will talk to her about it.

I must say that any type of extremism is definitely NOT supported by us and it doesn't matter if it's nazism, communism or the "modern" riots in the States. This site is apolitical and I'm curious myself how this young lady will explain her stupid tattoo. Let's just ignore her stupidity and focus on her beautiful... eyes :-)

I actually don't see what's wrong to stand by your ideals, homeland or even just your partner. It's just that this one is a forbidden symbol in Germany because of "history", so I only wanted to give a heads-up in case she ever wants to visit Germany. At least she doesn't have a certain old symbol of luck tattooed on her forehead yet. ;-)
Btw. It would be nice if she would't be completely shaved next time.

I don't find anything reprehensible about her tattoo "Meine Ehre heißt Treue" - only the gothic letters remind on bad times. But my view is focused only on her wide open heavenly cunt ♀️ ????