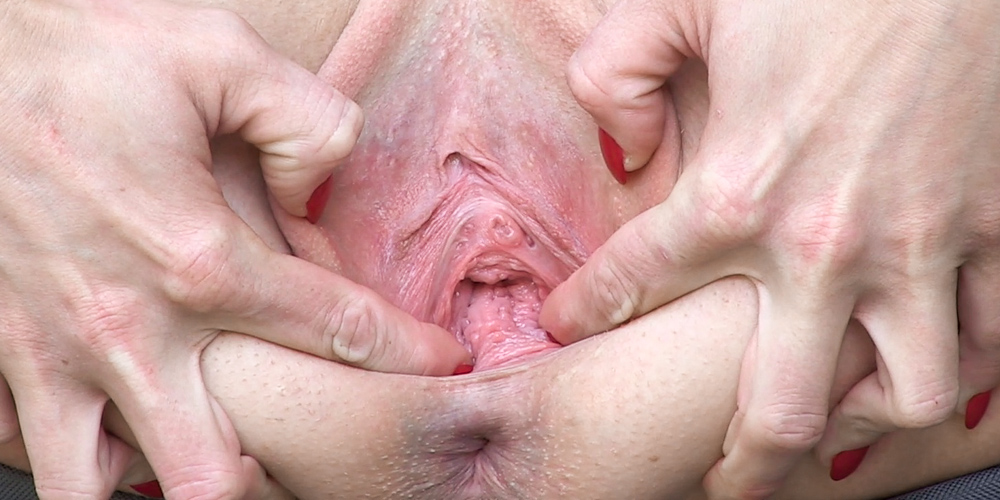 Chrissy starts this video the way we like it —reclining comfortably (it happens to be outside under a bridge), naked (okay, she has a black and white patterned top that has been pulled down to expose her ripe breasts), shaved, and spread wide with a speculum. The first thing you notice is how well she is lit inside: her cervix is bright and clear, for those of you who want no mystery at all. the second thing is that she turns the speculum a little, so that not only do you see deep into her vagina, you also see her labia majora and labia minora and clitoris in beautiful sun-lit detail.

The sunlight glistens on the wet surfaces of the inside of her pussy, shining off the complex concave convexity of her cervix (I didn't think I could make that an alliterative reference, but what do you know!), and she works her vaginal muscles so you can see them contract around the speculum. The thing about Chrissy is that she enjoys giving us the show. Of course she is gaped wide open, but then she picks her feet up off the ground to open up and be even more vulnerable than before.

She slides the speculum almost completely out, so you can see her cervix slowly disappear and watch her vagina close up, and then she pushes it back in, so that her cunt opens up once more and her cervix peeks out at us, as if to say "peek-a-boo!". Then she does pull it out all the way (and we can see her naturally stretched-open omanko) before sliding it in again and cranking it open once more. Even from far away with a full-body shot, you can see clearly to the bottom of her love tunnel, but up close, she gives us a beautiful view of the ripples and folds of her vagina as she pulses her muscles for us.

Then, smiling mischeviously, Chrissy licks the speculum clean and gives us some two- and four-finger reach-around spreads and stretches. Her tiny little red-haired landing strip is a beautiful counterpoint to the shiny pink open hole that she is playfully displaying. She also delights in showing us her erect clit, peeking out from under its hood. But you guys said you wanted cervix, so the speculum goes back in, as wide as it can be, opening Chrissy as wide as she can be, and she actually fucks herself with a full-opened speculum. And of course, there are also shots from the rear, with her cunt opened wide and tenting from behind, brilliantly lit. Yowza!

The corresponding photo gallery can be found here: INSIDE CHRISSY - August 6, 2016.

Awesome show by Chrissy! A beautiful, adorable model putting her cunt shamelessly on display. This one is a keeper, but then, all vids with Chrissy are xD

Hah, I like cervix views either with finger spreads or with speculum (without vibe :) well lit and you guys do an amazing job! This clip is fantastic

whoever thumbs this down is on the wrong site :P yeah I've asked for other things but PJ Girls #1 primary reason to exist is spreading . So find another one smh

Thank you for this new wonderful show !
I like how Chrissy plays with the speculum and shows us her great pink cervix.
Please more :))

Amazing girl, I appreciate the effort you guys at PJ take in taking all the suggestions into account. Beautiful girl! Speculum + Doggy pose = fantastic view. We must remember that our male mammalian brain is primed to respond to female rear views, having Chrissy performed like this is a fantasy come true. It would be better to leave the speculum, while in doggy pose, in vertical position instead of sideways, the cervix is completely lost. Thanks!

Do you really have to give two videos identical titles?
Chrissy is really awesome in all the previous videos. I haven´t seen this one yet but it looks like she goes really wide open before inserting the speculum. I´m sure I won´t be disappointed. I hope there will be more updates with this excellent pussy spreader!

Just a coincidence regarding the duplicate titles. I think my colleague just ran out of ideas. It's not easy to come with a new interesting title every day and not to be a native English speaker...

Makes sense. Just got a little confused and almost missed this video because I thought I had already downloaded it when there already was a video with that name in the folder.

a great Video, superb close up's of her beautiful pussy!!