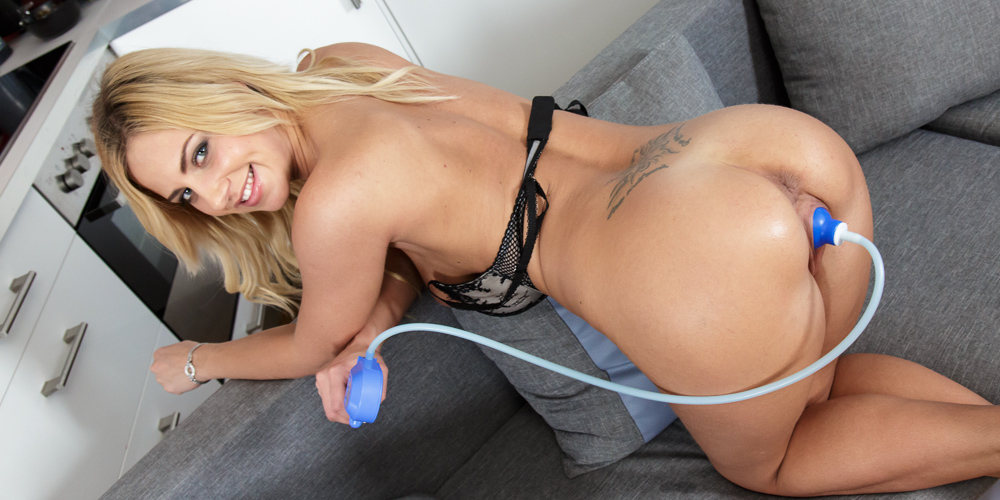 Like we said, Nathaly will do almost anything we ask, so this time we asked her to stuff her cunt full of an inflatable pussy-stretching balloon, and pump it up. No problem, but first she shows us her clit in close-up detail, and then she stretches her labia majora to open her vagina, and then inserts four fingers to show us the inner details of that wrinkled and folded punk tunnel. But that's just the warmup–the balloon comes next.

The toy goes in a few more times, her perfect shaved pussy lips and beautiful asshole framing the toy that gets a little bigger each time and is pulled out with a "pop". She even manages to insert a few fingers next to the toy, stretching herself just enough to finally birth the toy out. We also get the same show from the rear, as she inserts, inflates, ejects, and gapes. It is really fantastic watching her pussy change shape as she works hard and finally pushes the toy out. You can really see how much looser she is with the final rear gapes.

Nathaly gives a great performance as always and the first third of this video is excellent! It's a shame that the blue toy blocks the view for the rest of the clip however. Much prefer wire toys and whisks. Nice work anyway, especially with the first part of the clip. The clit close-ups are particularly nice - I'd love to see more of that on other models ;)

Well, it's a Nathaly. Again, Nathaly does not disappoint. Her destiny as a model seems to be the best pussy-gaping actress on the planet. In this video she doesn't waste time, gets rid of her panties and starts spreading the goods :)
As soon as she touches her pussy she gives those sexy little moans I love her for. Even if she was, she never seems bored or absent as she knowingly interacts with the camera, ergo us, the ogling pervs. Acting like this makes it easy for the admirer to bask in the illusion of having her personal attention. There are not many models who manage to set up a show like Nathaly does - as if she does it solely for me. If she was hiring licking slaves, I'd volunteer without any second thoughts.

ウワーッ、スッゲー、やっぱナタリーいいね。おっぱいもいいし風船を飲み込んだオマンコ、デカイ。風船が飛び出た後のオマンコのおっ広げも最高だ！Yo-ho! What a nice gal Nathaly is! Good tits and balloon swallowed OMANNKO is excellent. And after balloon pops out, the expanded OMANNKO is so exciting.